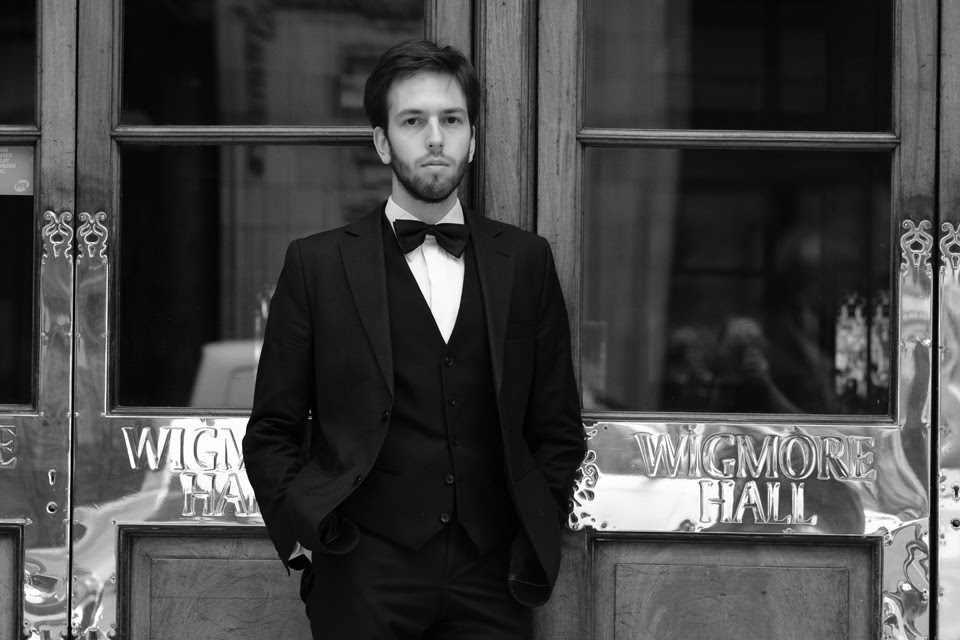 “All of my programmes are structured according to the tonality of each piece. I do think that the key relations in any given recital programme are of the utmost importance. Preluding is a lost tradition which was largely prevalent in the 18th as well as the 19th century and which was the solution for programming pieces which had conflicting tonalities. One was expected to modulate to a closely related key of the following piece, usually the dominant.
My programmes usually include music by neglected composers. There is so much great music out there, especially the keyboard repertoire, and it is a real shame that we keep hearing the same pieces over and over again. I also find that programming shorter pieces is easier to follow. A single large-scale work is more than enough for a single sitting.
I do hope you enjoy the recital and also manage to hear something new.”

Another fascinating concert by this young Bosnian musician.A programme of rarely heard works from a C.P.E Bach Fantasia to the rousing B flat Prelude op 23 by Rachmaninov.There was a range of sounds and colours in the C.P.E. Bach, played in an almost improvisatory way – in fact a true Fantasia where his natural technical command and intelligent musicianship were immediately put at the service of this rarely heard work.It was a true re-creation and was the hallmark of all the works that he presented in a very carefully thought out programme where the key relationships were very sensitively chosen to give an overall shape to the whole recital.His natural hand movements too were of a true artist,moulding the sounds not only audibly but also visibly and gave such a natural sense of phrasing and ease of execution.A pianist who thinks before he plays is a pianist to be reckoned with indeed but a pianist who actually plays not vertically but horizontally is even more of a rarity.The improvised link between the Bach and Mozart was so tastefully done that it was hard to know where one finished and the other began.Of course that was the reason,as he explained in his very interesting and informed conversation with me afterwards.The ornamentation in the Mozart just added to the exquisite charm and character of this much maligned gem.

It was the presence of Robert Levin at the Menuhin school and his studies of Fortepiano that aroused his interest in historic performance practices,as he described in the fascinating after concert conversation.The Chopin nocturne was not only given a magical performance but,rather more controversially,he even added a re-touch to Chopin’s own lavish bel canto as the delicate flourish at the end just added to the magic created.However as he suggested later this practice might have jury members of an International competition fighting amongst themselves.

The first and last of Schubert’s Impromptu’s D.899 and D. 935 just showed what an intelligent and sensitive musician he is.Playing or more precisely interpreting exactly what Schubert wrote.A scrupulous attention to the very detailed indications in the first Impromptu just reminded me of the first time I heard Damir in a lunchtime recital at St James’s Piccadilly.The big A major Sonata D.959 was given a performance where ever detail was incorporated into an architectural shape that just made one long for more – Schubert’s heavenly length fully justified in his poetic hands.- I have written about it below and he has since gone on to record the work on a commercial CD.

Although his scrupulous study of performance practices are quite unique in a pianist of his stature it does not exclude a sense of freedom and character.If anything this very knowledge gives him even more freedom!The last Impromptu in F minor was given a frenzied impassioned full blooded performance of Serkin or Annie Fischer proportions.His teacher Dmitri Alexeev is not an intellectual as Brendel of Serkin but has a magnificent sense of style and is one of the great pianists of our time.Damir has managed to incorporate both the knowledge of Robert Levin with the instinctive natural artistry of Alexeev and it is immediately apparent from his playing of such colour of fire and imagination.It was even more apparent in the short pieces by Scriabin that were played with the same ravishing sense of colour and freedom as Alexeev.Dmitri Alexeev has just recorded the complete works of Scriabin so it was very interesting to see the eclectic choice that Damir displayed today.

The two preludes op 17 by Blumenfeld were a real rarity.Even Horowitz who was a pupil of Blumenfeld never programmed any of his music.Damir has made a survey of the works of Blumenfeld and found some real masterpieces amongst his large output.The two beautiful preludes chosen for today’s programme we’re just a taste of the magnificent 24 preludes that he is recording.Adding a missing link to the CD catalogue which is sadly lacking many beautiful but rare works that are still waiting to be discovered by pioneers like Damir.The same curiosity and passion as Mark Viner with Alkan and Thalberg or Tyler Hay with Kalkbrenner,Damir will add Blumenfeld.Mark Viner tells me that he too has just recorded the Blumenfeld preludes op 17 and that Horowitz had played six of them in the late 20’s or 30’s in a celebration concert in Ukraine for his teacher.This was,of course before he took Paris by storm and conquered the world.Before the famous critic that irritated Artur Rubinstein :’The greatest pianist alive or dead!’I am proud to say that all three are KCT artists and what a mine of information they are!

A magical fairy tale by Medtner,another rarely heard work , although Medtner did record nearly all of his own works but they still have to be fully understood .He died in England in the early 50’s where he had fled in poverty and was much helped by his student friend Edna Iles.He is buried in Hendon cemetery.

Ending with Rachmaninov’s rousing B flat Prelude op 23 Damir just showed us his fiery temperament and astonishing technical ease with a performance of ravishing grandeur and scintillating excitement.

In a private conversation Damir confided that whilst he works at his career he intends to enter the world of investments of which he has become quite an expert in cyber currency.Subsidising his studies rather than compromise his artistry to fit into a conventional mould.An extraordinary artist and personality and someone to watch out for and that the KCT can proudly bring to the attention of a larger public.

Introduction and post-recital interview with Christopher Axworthy, Co-Artistic Director and Trustee of the Keyboard Charitable Trust.

DAMIR DURMANOVIC As an internationally sought-after performer, Damir Durmanovic has performed in venues and festivals including the Wigmore Hall, Champs Hill Studios, YPF Festival Amsterdam, Wimbledon Music Festival, Renia Sofia Audotorium Madrid, Gstaad Menuhin Festival, Derby Multifaith Center, Flusserei Flums, ‘Ballenlager’ Vaduz. He has won prizes in numerous international competitions including The Beethoven Intercollegiate Junior Competition in London, Adilia Alieva International Piano Competition in Geneva and Isidor Bajic International Piano Competition in Novi Sad. He has performed in masterclasses with Claudio Martinez-Mehner, Dmitri Bashkirov, Pascal Devoyon, Jacques Rouvier, Robert Levin, Jean-Bernard Pommier, Tatyana Sarkisova, and chamber ensembles such as the Emerson Quartet. Damir is also a scholar at the ‘Musikakademie Liechtestein’ and regularly participates in the courses organised by the academy. Damir began his studies at age of eight in his home country, Bosnia and Herzegovina, with Maja Azabagic before continuing his studies at the Yehudi Menuhin School where he studied with professor Marcel Baudet. Damir is an ABRSM scholar and is kindly supported by the Talent Unlimited Scheme. He is currently studying at the Royal College of Music in London with professor Dmitri Alexeev.

Here is your free link to watch the concert, which comes from Steinway Hall, London: https://youtu.be/XtTH6Qd_-ZI

By making a donation you will be supporting the Keyboard Trust and its pianists. .
The Keyboard Trust is entirely dependent on donations from our friends for its work in supporting outstandingly talented young musicians and so we’d be especially grateful to you for your support of this venture.

Una risposta a "Damir Durmanovic a musical genius at work"