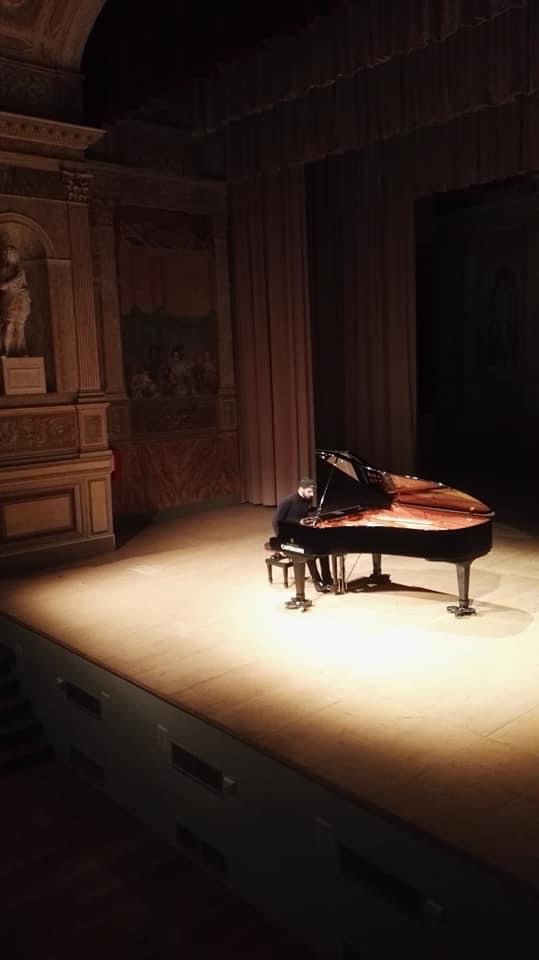 Not sure what the title has to do with what we heard tonight for here was a piano of ravishing beauty played with the passion and energy of a young ‘Lion’ indeed.
It is always nice to see Mimmi Martinelli/Cafaro in the audience and it is  invariably a sign that we will hear a real musician play. 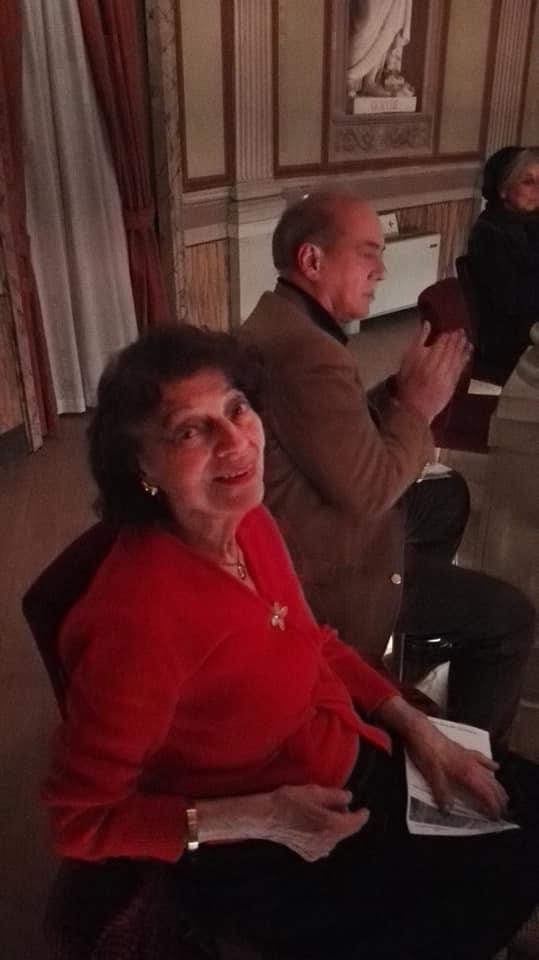 She and her late husband Sergio Cafaro have taught and helped so many artists who have established themselves in a profession that is always happy to welcome real musicians.
I am thinking of the many who have passed through my theatre just down the road from the Cafaro studio:
Roberto Prosseda,Alessandra Amara,Luisa Prayer,Lisa Mancini,Francesco Libetta and many many others.
Luca had not studied with them but he had received a top award in the competition that bears the name of Sergio Cafaro. 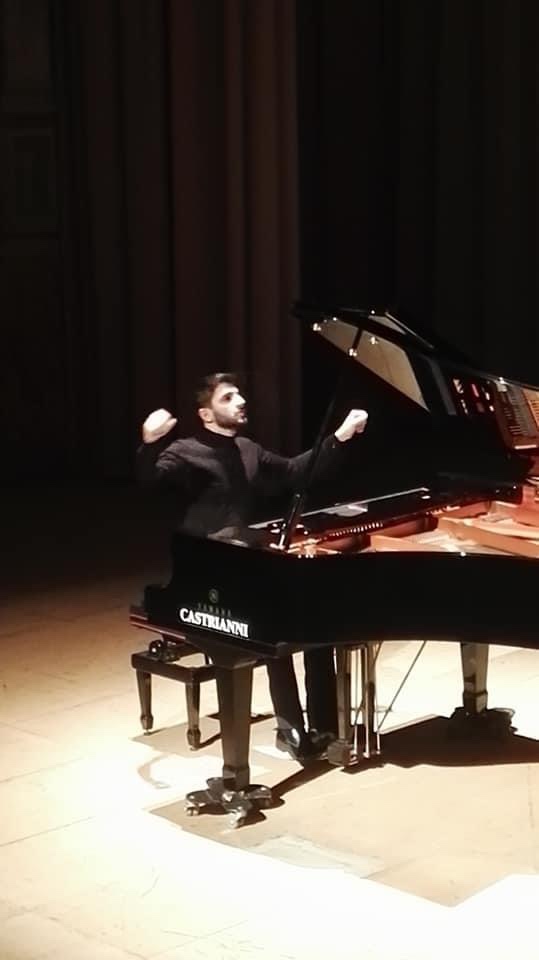 It was in particular his Scarlatti Sonata in D minor K 77 in the programme and the C major sonata offered as an encore that showed to the full his intelligent musicianship.
The opening of the Sonata K.77 could almost be mistaken for a Bach sarabande but the clockwork precision of what followed was beautifully shaped.Not sure I liked the staccato imitation but it was played with convincing style and remarkable sense of colour.
The C major Sonata as an encore was played with great rhythmic energy and remarkable precision. 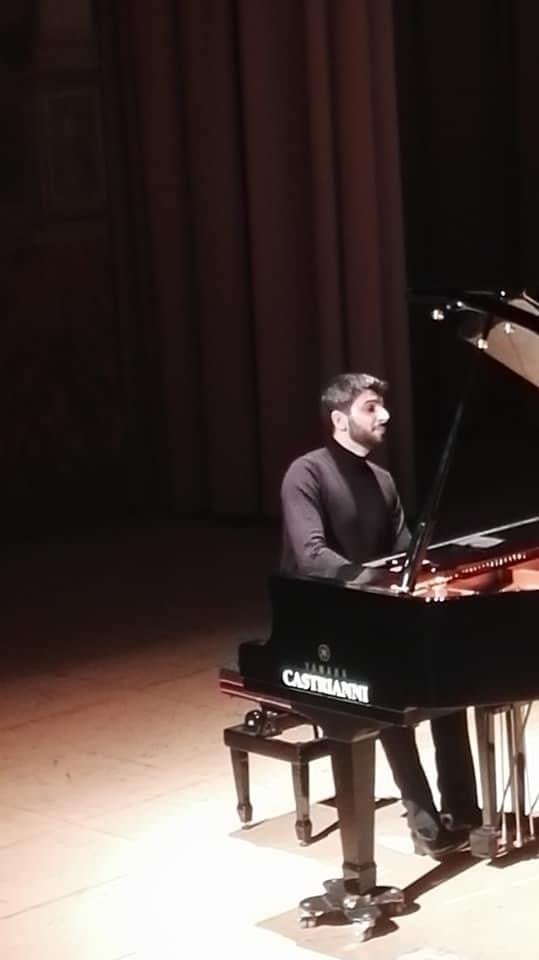 The highlight of the concert though was the Granados ‘Allegro de concierto’ op 46.
He threw himself into this magic world full of ravishing colours and scintillating pianism.
This was a world with which this young ‘lion’ from Calabria could identify himself with as he entered the fray with such total conviction.
Throughout the recital I was struck by the beauty of sound of the piano.
I thought maybe it was no longer the usual Yamaha but a very fine Steinway,such was the full rich sound.
Reading the biography of Luca I was pleasantly surprised that he had been taught in Potenza Conservatory with a teacher from the Matthay school.
It was infact the same Yamaha piano but played by someone with the extreme sensibility to sound as a Myra Hess or a Moura Lympany.
I used to have lessons in the Matthay room at the Royal Academy in London.There were all sorts of objects like the ones you see on a billiard table but as Moura Lympany used to tell me it was Uncle Tobb’s sensitivity to touch and sound that was so remarkable. 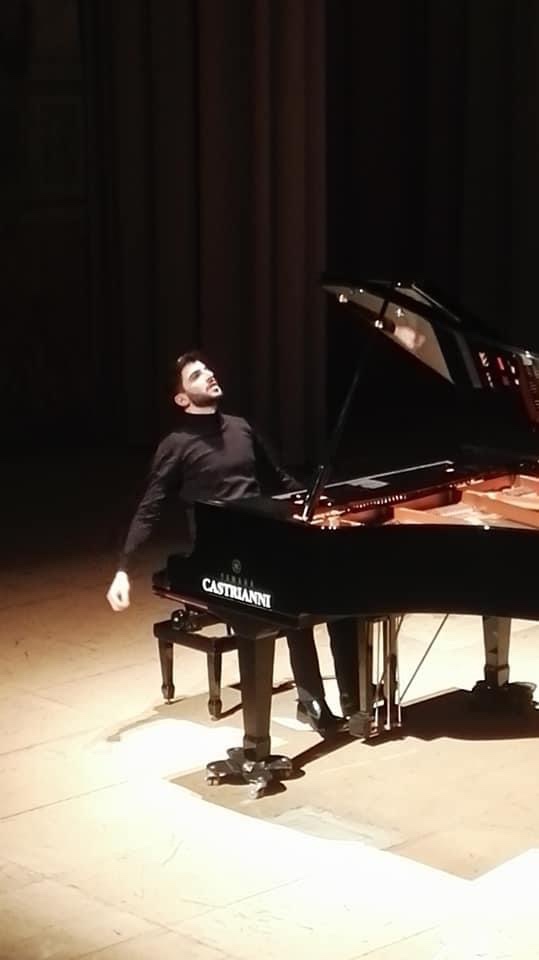 The Schumann op 20 and 22 fared less well.
Luca’s great temperament made him choose breakneck tempi where the articulation and precision that he had brought to Scarlatti were abandoned as he threw himself with such passionate involvement into these masterpieces.
Unfortunately he had to over rely on the pedal to cover his sins.
There were of course some very beautiful things in the Humoresque in the more lyrical episodes as there were in the G minor sonata. It was just a pity that his great sense of self identification precluded a clearer looking glass.
Some of the most memorable things in a very interesting recital were the sublime opening of the Humoresque or the exquisite lyrical central section of the last movement of the sonata.The sublime lied – Andantino- that is the second movement of the sonata had given the title to this concert-‘Intimate piano’ so Valerio explained afterwards.It was indeed beautifully expressive even if the singer might well have asked her accomplished partner to play down a bit !

That is the clue to the “Intimate Pianoforte” of the title……..according to

Valerio Vicari our ever present host to so many talented musicians via the Roma 3 University of which he is artistic director. 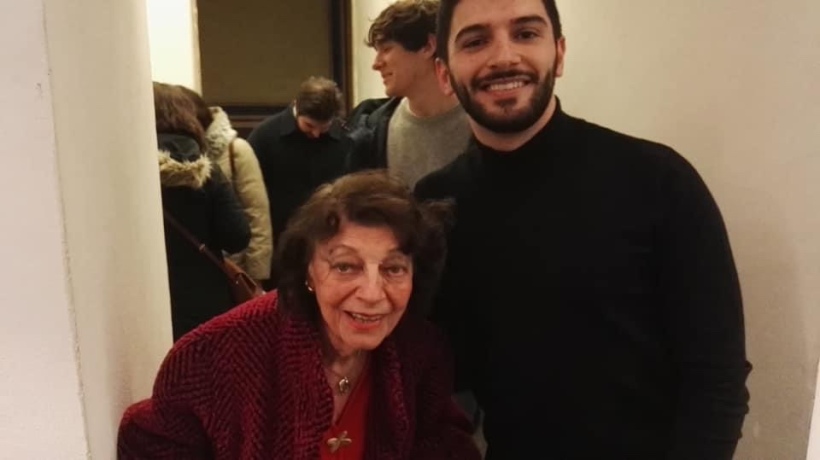 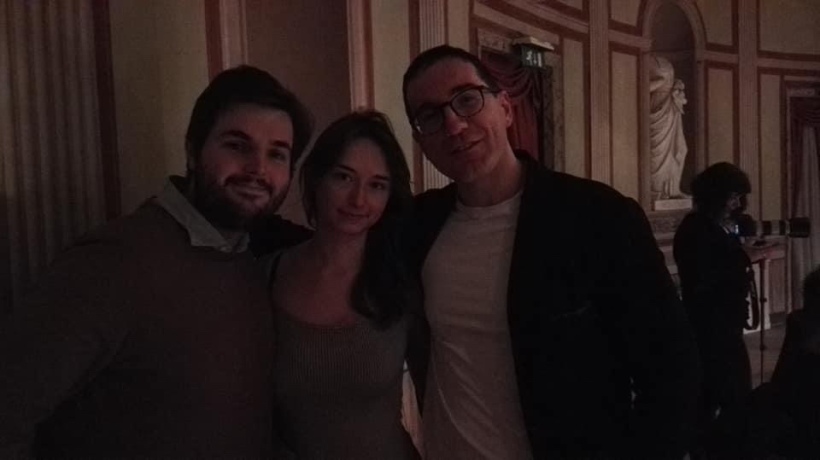 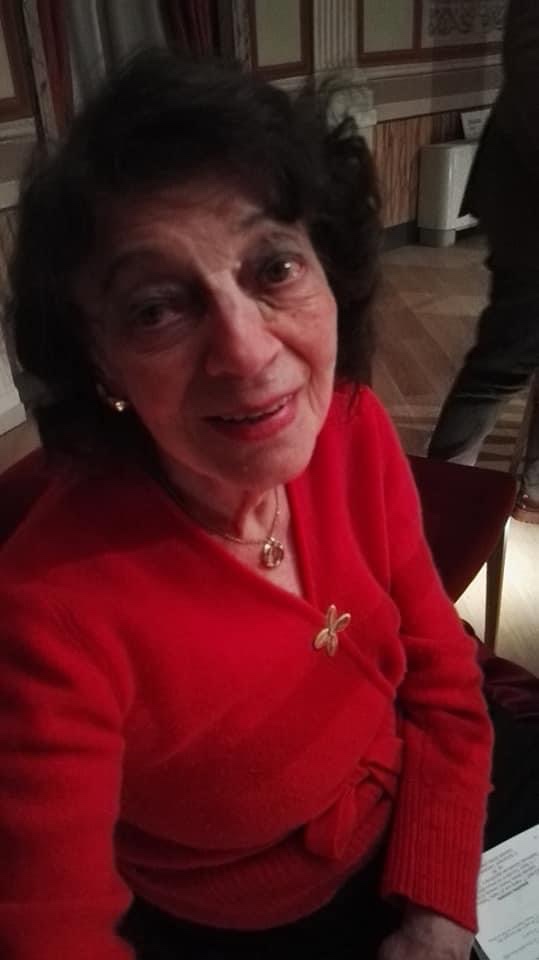 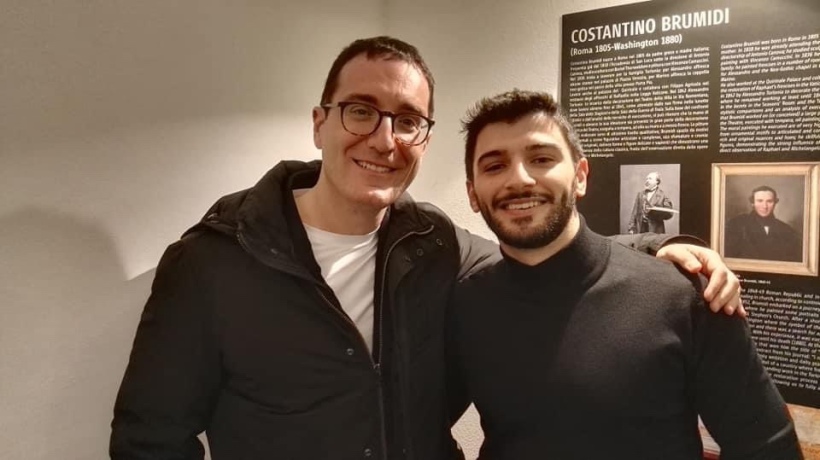 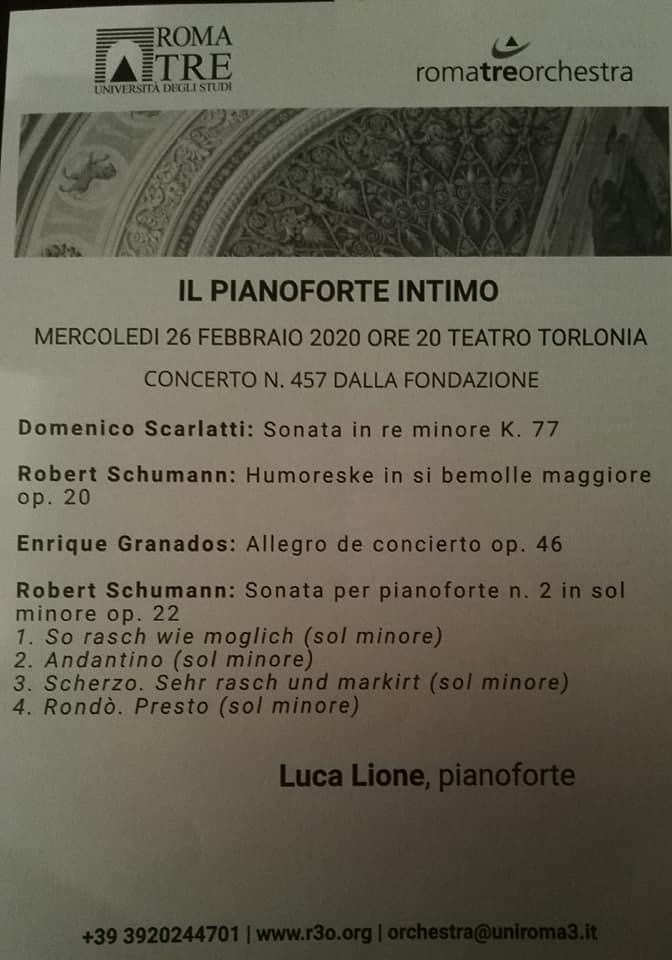 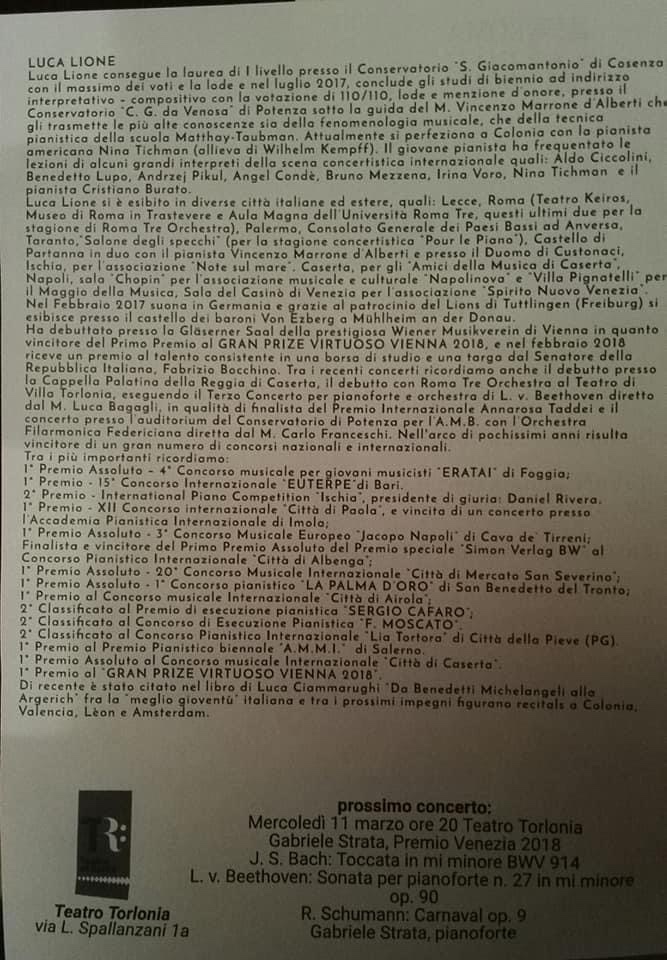 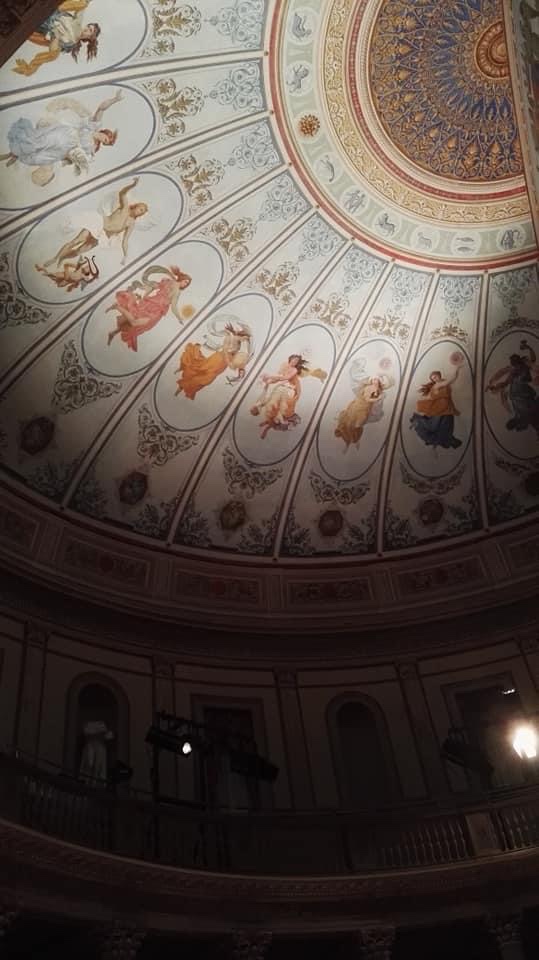 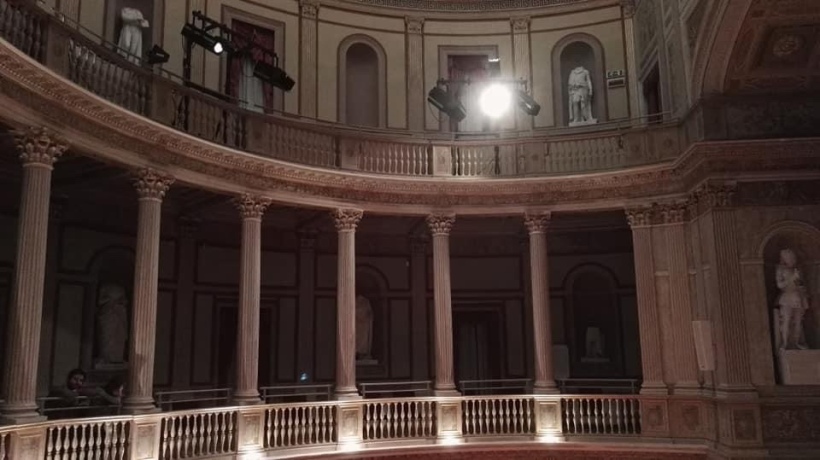