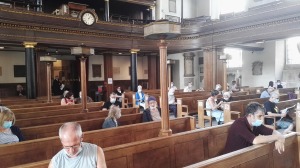 As an internationally sought-after performer, Damir Durmanović has performed in venues and festivals including the
Wigmore Hall, Champs Hill Studios, YPF Festival Amsterdam, Wimbledon Music Festival, Renia Sofia Audotorium Madrid,
Gstaad Menuhin Festival, Derby Multifaith Center, Flusserei Flums, ‘Ballenlager’ Vaduz. He has won prizes in numerous
international competitions including The Beethoven Intercollegiate Junior Competition in London, Adilia Alieva
International Piano Competition in Geneva and Isidor Bajic International Piano Competition in Novi Sad.
He has performed in masterclasses with Claudio Martinez-Mehner, Dmitri Bashkirov, Pascal Devoyon, Jacques Rouvier,
Robert Levin, JeanBernard Pommier, Tatyana Sarkisova, and chamber ensembles such as the Emerson Quartet. Damir
is also a scholar at the ‘Musikakademie Liechtestein’ and participates annually in the courses offered by the Academy.
Damir began his studies at age of eight with Maja Azabagic before commencing his studies at the Yehudi Menuhin
School where he studied with Professor Marcel Baudet.
Damir is an ABRSM scholar and is kindly supported by the Talent Unlimited Scheme. He is currently studying at the
Royal College of Music in London with professor Dmitri Alexeev.

Could there be any better way to open the lunchtime series of concerts at St James’s Piccadilly than with an all Schubert recital.Especially when there is such a fine young musician to guide us through the magic sound world of this poet of the piano destined to have such a tragically short life.It was the penultimate Sonata in A major that was the main work in this short lunchtime recital.Together with the C minor and B flat sonatas they were written during the last months of Schubert’s life, between the spring and autumn of 1828, but were not published until about ten years after his death, in 1838–39.

Four short Landler D 366  created just the intimate atmosphere of charm and elegance before bursting into the grandeur and nobility of the A major sonata D 959.A few improvised arpeggios took us from the A minor of the last of the landler to the major of the sonata.Damir showed himself  to be a true stylist where imperceptable hesitations and changes of colour brought an almost orchestral variety to the sounds that he was able to find on this not easy Fazioli piano.A true musician who could make every phrase speak so eloquently with such ravishingly beautiful sound.Has the ending of the first movement ever sounded so beautiful?An ideal preparation for the full blossomed beauty of the Andantino.But there was also a fierce tempest blowing where the piano from a whisper was made to roar and tear up and down the keyboard in an astonishing transcendental way.The storm passing and the melody returning embellished with the most ravishing comments like jewels glistening from afar.A quite extraordinary control of the keyboard that could create so many different sounds but at the same time keep the overall architectural shape.

The Scherso had the same irresistible lilt as in the opening landler and contrasted so well with the tempestuous trio.Maybe the same hesitations each time gave the game away too obviously but it was played with such ravishing delicacy that one could forgive this youthful indulgence! He found a fuller almost orchestral sound for the Rondo which allowed him some truly wondrous changes of colour with a left hand like a wind brewing in the distance with a whirlwind swirling above it that gave  way to one of  Schubert’s unexpected glorious outburst of song and the magic reappearance of the rondo.

A whole world created by this extraordinary young musican where time seemed to stand still.Such was his ability to make the music speak so eloquently with total concentration that he led his masked audience into a wondrous world that we have missed for too long.I was not surprised to read that has been trained at the Menuhin School under Marcel Baudet and that now he is working with that supreme stylist Dmitri Alexeev at the Royal College here in London.