Szymanowski: Etude in B flat minor Op 4 no 3

Rachmaninov: Sonata no 2 in B flat minor Op 36

Pianist Ben Schoeman is a Steinway Artist. He won several awards, including the first grand prize in the 11th UNISA Vodacom International Piano Competition, Pretoria (2008), the gold medal in the Royal Over-Seas League Music Competition, London (2009), the Standard Bank Young Artist Award (2011), the contemporary music prize at the Cleveland International Piano Competition, USA (2013), and the Huberte Rupert Prize from the South African Academy for Science and Art (2016).He has given solo, chamber music and concerto performances in such prestigious concert halls as the Wigmore, Barbican, Cadogan, LSO St Luke’s and Queen Elizabeth Halls in London, the Konzerthaus in Berlin, the Gulbenkian Auditorium in Lisbon, the Fondazione Cariplo Auditorium in Milan, the Durban and Cape Town City Halls and the Romanian Athenaeum in Bucharest. He has performed at many international festivals such as City of London, Edinburgh Fringe, Chester, Enescu Bucharest, Grahamstown and Ottawa. As a concerto soloist he has collaborated with several conductors, including Wolfram Christ, Nicholas Cleobury, Carlos Izcaray, James Judd, Gérard Korsten, Theodore Kuchar, Diego Masson, En Shao, Yasuo Shinozaki, Arjan Tien and Conrad van Alphen.Schoeman studied at the University of Pretoria, the Accademia Pianistica ‘Incontri col Maestro’ in Imola, the Scuola di Musica di Fiesole in Florence and the Guildhall School of Music and Drama in London with renowned professors such as Joseph Stanford, Louis Lortie, Michel Dalberto, Boris Petrushansky, Ronan O’Hora and Eliso Virsaladze. He obtained a doctorate in music from City, University of London and the Guildhall School of Music & Drama with a thesis on the piano works of the eminent South African composer Stefans Grové.In collaboration with his duo partner, cellist Anzél Gerber, Ben Schoeman was awarded the first prize in the Ibla Grand Prize Competition in Italy. The duo performed at Carnegie Hall in New York and has received the gold medal in the Global Music Awards for their recording of music by Anton Rubinstein. Stefans Grové dedicated his Concerto for Piano, Cello and Orchestra ‘Bushman Prayers’ (2013) to Gerber and Schoeman, and they premiered the work with the Cape and KwaZulu-Natal Philharmonic Orchestras.Schoeman’s solo album, featuring works of Franz Liszt, is available under the TwoPianists label. His performance in London with pianist Tessa Uys of Beethoven’s 9 th Symphony, arranged for piano duet by Xaver Scharwenka, was recorded for broadcast on South African national television.Ben Schoeman is a senior lecturer in piano and musicology at the University of Pretoria, where he received the Laureate Award. His students have received prizes at several competitions, and he has served as a jury member at national and international competitions 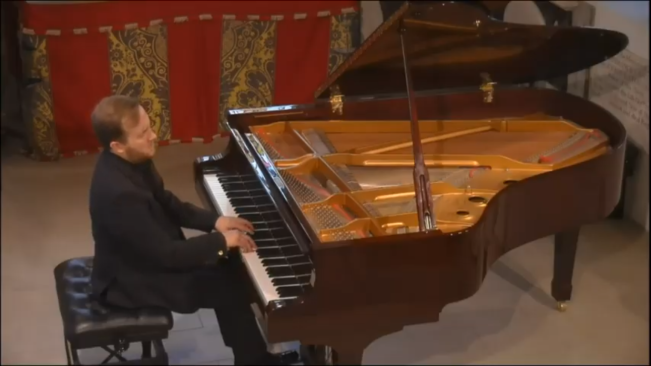 I had last heard Ben together with another distinguished South African pianist Tessa Uys playing the Beethoven 9th Symphony in the Scharwenka edition for piano duet.The nine symphonies  in the Scharwenka edition  that Tessa had grown up with in her mother’s studio   in South Africa.Before the Corona virus pandemic struck they had in programme the complete Symphonies for the Beethoven 250 celebrations. I had already been able to hear in various venues in London  their superb performances of  the third,fifth and sixth symphonies and am looking forward to an eventual marathon from these two remarkable musicians .

In the meantime Ben arrived in Perivale with a solo programme that  showed off his full range of sounds.From the  clarity of  Bach to the sumptuous romantic outpourings of  Rachmaninov. 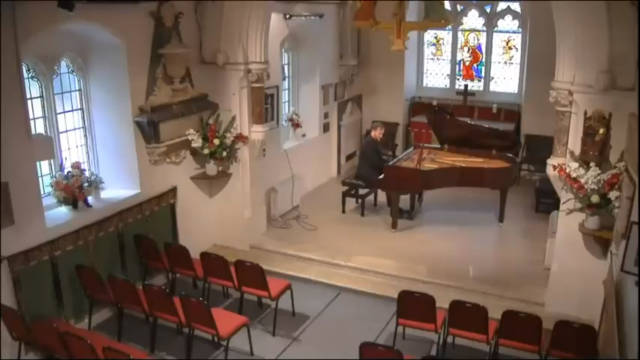 The Bach Toccata in E minor SV 914 was played with a clarity and a sense of fantasy especially in the quasi improvised Adagio.All leading to the Fuga  – Allegro played at breakneck speed but with a control and sense of line that was remarkable .An infectious sense of rhythmic urgency that was only interrupted by the grandiloquent final flourish.

As a complete contrast the beautiful song like study in B flat minor op 4 n.3 by Szymanowski followed.A great song almost Hollywoodian in its romantic fervour was played with a great sense of colour and passionate conviction.The third Scherzo and third Impromptu by Chopin were a little disappointing as they followed the old tradition of  sentimentality and  lack of precision.This was  especially notceable in the cascading comments in the scherzo that should glisten like a ray of sunlight with a rhythmic precision that contrasts with the great choral which they ornament.The Impromptu  is almost Poulencian in its suave clear melodic line.I remember Rubinstein playing it without any sentimentality but with the same clarity and inner meaning that he gave to Poulenc’s much neglected Impromtus.Ben played them with great sentiment which he obviously feels  very deeply but for me too personal and  gets in the way of the aristocratic sentiment that is within the notes themself without any external help.The 9 Preludes op 11 by Scriabin were given a superlative performance where his very sense of shape ,colour and freedom gave life to these remarkable tone poems in a way that had escaped Benedetto Lupo who I had heard from Milan the day before.

This in turn led so naturally to the sumptuous sound world and astonishing technical brilliance of the second sonata by Rachmaninov. Feats of virtuosity were thrown off with great ease and the amazingly rich textures played with sumptuous sound.But it was also remarkable for the beauty  in the meno mosso of the first  movement that  was played with such subtle nostalgia . The sheer beauty of sound in the simple melodic line of the opening of the second movement  led to the rhapsodic sound world that is so much part of Rachmaninov before the eruption and romantic effusions of the last movement.The coda was quite astonishing for it’s total command allied to such excitement and breathtaking virtuosity. 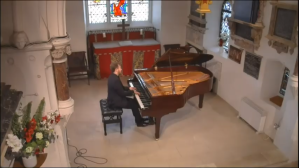 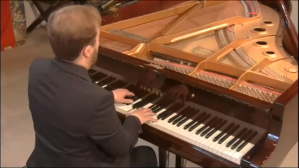 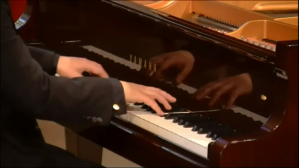