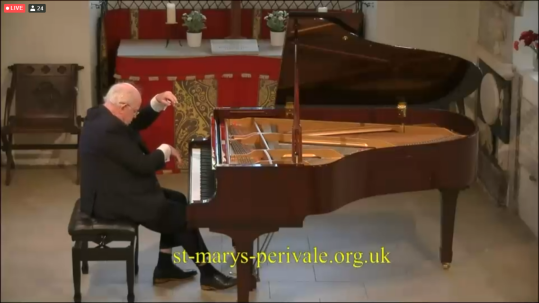 Bach-Jacobson: Sarabande from 6th Cello Suite
Granados:  The Maiden and the Nightingale (Goyescas no 4)
Chopin    Sonata no 2 in B flat minor Op 35 “Funeral March”
Rachmaninov: Prelude in G flat Op 23 no 10

One of Britain’s most creative and distinctive pianists, Julian Jacobson is acclaimed for the vitality, colour and insight he brings to his enormous repertoire ranging across all styles and periods. He was born in Peebles, Scotland and studied in London from the age of seven with Lamar Crowson (piano) and Arthur Benjamin (composition), and had published four songs by the age of nine. From 1959 to 1968 he studied at the Royal College of Music where his principal teachers were John Barstow and Humphrey Searle. On graduating with the Sarah Mundlak Piano Prize in 1968 he took up a scholarship to read Music at Queen’s College, Oxford. After further studies with Louis Kentner he made his London debut at the Purcell Room in 1974, follwed by his Wigmore Hall debut as both solo recitalist and chamber musician. During the 1980s he established himself as a fine duo and ensemble pianist, partnering many leading instrumentalists including Nigel Kennedy, Steven Isserlis, Moray Welsh, Colin Carr, Alexander Baillie and Philippa Davies.
His appointment in 1992 as Head of Keyboard Studies at the Royal Welsh College of Music and Drama led to an increasing concentration on solo work. In 1994 he embarked on his first cycle of the complete 32 Beethoven sonatas; he has now presented the cycle eight times, the last two in a single day (apparently being only the second pianist to attempt this). His many festival appearances as soloist and chamber musician include Edinburgh, Aldeburgh, Bath, Brighton, Cheltenham, Dartington, Glasgow, Huddersfield, Norwich and Prussia Cove on tour. He has appeared in more than forty countries on five continents. An ongoing commitment to contemporary music has led to many commissions and premieres. In 1987 he gave the critically acclaimed UK premiere of Ligeti’s now famous Etudes Book One; a subsequent recording for BBC Radio 3 was highly praised by the composer.Julian Jacobson is currently a professor of piano and chamber music at the Royal College of Music. He was Artistic Director of the Paxos International Festival, Greece, from 1988 to 2004, is Artistic Director of “Rencontres Musicales à Eygalières”, and teaches regularly at Cadenza Summer School at the Purcell School, North London. He has given masterclasses in Germany, Paris, Budapest (Franz Liszt Academy), Spain, Sweden, Canada, China, Hong Kong, Singapore, Malaysia, Australia, the Middle East, and on many occasions in Dartington.

An extra recital added to the Tuesday and Thursday series of  concerts live streamed from St Mary’s in Perivale.It was to give a platform to a distinguished musician who was only too pleased to be invited to play live after so many months of cancelled or postponed concerts.Julian Jacobson is one of the very few musicians who can play all 32 Sonatas of Beethoven on the same day in a true marathon performance.And that is only a small part of his repertoire and activity as a musician.He was consultant together with Leslie Howard and Paul Badura Skoda for the Barenreiter edition of the Beethoven Sonatas in the new and most complete edition  to date edited by Jonathan del Mar.

One just has to look at his curriculum to marvel at all the  activities that he is able to undertake.It  was indeed fascinating to hear his very learned introductions to the works he presented and then to hear them so clearly presented by a musician who was intent on showing us the great musical line of the works.There were moments in the Chopin Sonata op 35 where one would have liked a little more detail but it was interesting to see how he played the repeat in the first movement.There have long been discussions about this repeat! Should it include the introduction  or be repeated only to the doppio movimento some bars later?Well of course Julian being the  learned musician he is realises that the introduction is exactly the main ingredient  of the development section that follows with the great bass intervals.As he told us the Funeral March was written two years before the rest of this ‘dark,strong and tragic sonata ‘.He also quoted Charles Rosen as saying these were not four independent movements just pieced together but they have no independent life of their own.A performance of great lines in which the lightness and agility of the second was slightly laboured but the final movement of continuous triplets was played with great agility.A mysterious movement at times even atonal that no one has quite understood how it evolved as it is quite unique in its originality.

Julian’s own transcription of the 6th cello suite opened the concert.He had heard  the suites as a student at Oxford  University when Rohan de Sarem played them over two evenings.Piers Lane had invited Julian to play in his series of transcriptions at the National Gallery some years ago and what better excuse than to transcribe the Sarabande from the 6th suite. Written for a five string instrument and the hardest to play Julian decided that he too would make it more difficult for himself by playing the Bach original in the left hand before adding his own harmonies and embellishments to the repeat of Bach’s original .A fascinating transcription played with great style and colour.

A very interesting introduction to Goyescas by Granados  of which he played one of the six pieces: ‘The Maiden and the Nightingale.’Julien had listened to an historic recording of Granados playing it and had noticed that there was a note that was not in any of the published scores.He found the same difference looking at the opera of Goyescas, a one act opera based on this piano suite of 1911 and  first performed in 1916 at the Metropolitan Opera House in New York .The opera was based on themes from the famous piano suite of 1911, which he orchestrated and augmented to form a three-scene work. The libretto had to be fitted to existing melodies, the reverse of the usual way of writing an opera. Though the opera is rarely performed, the piano suite forms part of the standard piano repertoire.The success of the Met premiere of Goyescas led indirectly to Granados’s death. He was invited by President  Woodrow Wilson to perform a piano recital at the White House causing him to postpone his return to Spain. Granados and his wife lost their lives on March 24, 1916 when their ship, the French steamer Sussex, was torpedoed by a German U-boat in the English Channel.

Rubinstein too played as the composers recording.His was the first performance that I had heard in public.Rubinstein being a friend of Granados obviously followed the composers own indications that has sadly not been the case in the editions that were subsequently published.A beautifully modulated performance of great strength and charm.

The Prelude in G flat op 23  by Rachmaninov was  as Julian said the ideal calming piece to play after the Chopin Sonata and it was infact a most delicately and beautiful shaped performance .

Dr Hugh Mather was proud to say that Julian will be one of the 32 pianists that will perform the Beethoven Soanatas over two days -October 3rd and 4th in St Mary’s celebration of Beethoven 250.If any of the pianists should be indisposed I am sure that Julian at a drop of a hat could fill in!Hats off to an extraordinarily versatile musician . 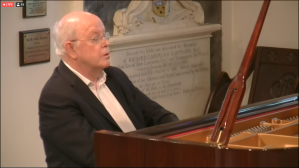 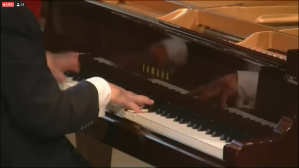 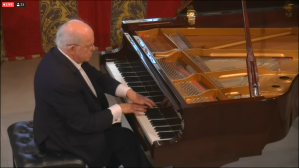 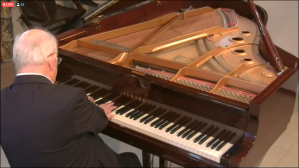 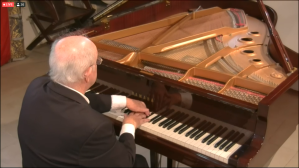