Acclaimed for the originality of his concert programmes and the depth of his interpretations, Patrick Hemmerlé is a French pianist living in England. He can often be heard performing such works as the 24 Chopin Etudes, the 48 Bach Prelude and Fugues, or    lesser-known composers. Recent engagements have taken him to New York, Los Angeles, Berlin, Paris, Vienna, and Prague, as well as many festivals and music society in England.Patrick has published 3 CDs, which have been well received by the international press. His latest recording project, to be issued in 2020 is a pairing of Bach’s Well Tempered Clavier and Fischer’s Ariadne Musica.  He is in demand as a lecturer. He has given talks for the Cambridge University, as well as a cycle of concert-lectures on French music, presenting composers little known to the general public,. This led to the recordings of the piano music of Jean Roger-Ducasse and Maurice Emmanuel. Patrick is laureate of the international competition of Valencia, Toledo, Epinal, Grossetto, and more recently the CFRPM, in Paris, where his interpretation of Villa-Lobos’s Rudepoema, raised a great deal of interest.  He was trained in Paris at the Conservatoire (CNR), under the tuition of Billy Eidi.

They say miracles do not strike twice but listening to Leonora Armellini from Pordenone yesterday and today to Patrick in Perivale I would not have believed such sounds possible on a Yamaha piano!

I was told off by the Yamaha dealer in Milan for saying that yesterday.I told him that I prefer the great German pianos of Steinway or Bosendorfer but a great artist can sometimes convince us that the Yamaha is just as good.
The difference is that even a beginner on a German piano can convince whereas he cannot on Yamaha.
I remember Richter playing exclusively Yamaha in the latter part of his career.I heard a Schubert recital in the RFH in London with four sonatas.
I was sitting not in my usual choir seats used to being as near to the piano as possible. I was in the gallery stalls escorting my future wife for the first time in London and to the RFH where we could feel the full atmosphere and see the hall but I could not see what piano he was playing.
I was astounded when I went to the stage afterwards and saw that it was a Yamaha.
The same thing happened with Mariam Batsashvili at her Wigmore Hall debut.Such wondrously delicate sounds I assumed it was the usual hall Steinway and I could not believe as I went to greet her in the green room that it could have been a Yamaha.https://www.facebook.com/notes/christopher-axworthy/a-star-is-born-mariam-batsashvili-at-the-wigmore-hall/10154367837552309/

You see miracles can happen and today in Perivale it certainly did! 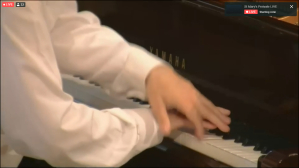 Not only wondrous colours and magical sounds but a programme where each piece led into the next in a succession that was astonishing.He had after all told us in his brief introduction that the programme would be eclectic and coherant and was designed to be played without a break.
The one place where they did not quite fit  so perfectly together he added an arpeggio link ,like the old virtuosi of the past.It managed to join the frenzy of the F minor study by Liszt so naturally to the pure magic of Fauré’s D flat nocturne.
A little piece by Severac suddenly became the world of Debussy’s L’Isle joyeuse.
And joyous it was as after a series of fleeting  melodic glimpses the clouds parted and the work erupted with the overwhelming passion that I have only once heard from another pianist.
That pianist was Annie Fischer and it has remained with me for over 30 years as I am sure the recital today will too.

The Toccata in D by Bach rarely have I heard played with such sense of character .The song and the dance indeed but also much more besides .A sense of nobility and architectural shape with some very delicate ornamentation and adding some stops here and there where it gave great depth to the sound.Not the barnstorming transcriptions of Busoni that are wonderful in their own right but here was a musician who knew so well the organ and the harpsichord stops that the piano lacks.There was a great contrast too between non legato and a cantabile played seemingly and miraculously without smudging the sounds with the pedal that would have been totally out of character. The recitativo and almost orchestral comments were captivating.The part playing in the Adagio was of astonishing clarity with such  a flexible rubato that came so near but never overstepped the boundary of good taste and style.There was a truly magical transition passage with added bass stops making a great question and answer seemingly  between two keyboards and then the joyous overflow of the toccata played with an infectious rhythmic drive.What an opening……what a personality!

His own arrangement of Mendelssohn’s Scherzo from a Midsummer Night’s Dream had more colour than Rachmaninov’s famous transcription.This was more Mendelssohnian with such a fleeting will’ the wisp filigree it was indeed a dream of  Midsummer just past.

It led straight into the grandiose opening of Schumann’s Toccata op 7.Almost the same world as  Mendelssohn when placed side by side like this.With its fleeting virtuosity and beguiling bursts of cantabile.Of course Schumann’s harmonies and modulations turn this toccata into the masterpiece  that it undoubtedly is.A showpiece for a master technician but above all for a musician.Impish good humour mixed with almost pastoral colours.The fugato was a miracle of clarity whilst in crescendo  and the climax was played with a magnificent richness of sound and passionate involvement.The most remarkable thing of course was his perfect legato throughout which is the real test of this work.Certainly one of the finest performances that I have heard in years.

Dying away as Schumann asks to almost a whisper and Patrick’s hand all ready for the magical opening notes of the Fourth Ballade by Chopin.Here there was above all a luminosity of sound as the theme shone out with bell like clarity and simplicity.I thought the arpeggiated left hand chords though were a little exagerrated and throughout the Ballade became a little mannered.Like the good old Chopin tradition  of yore!But even so it was a remarkable performance for many other reasons .The superb return of the main theme and the magical build up to the climax  and the adding of a bass octave to the great final arpeggio swirls of passion as great pianist often do in public performances at this point.Perlemuter showed me once that Cortot arranged his left hand so that the first bass note of the arpeggio he would play with the thumb to get extra power.It is easier and more effective to add an octave though as Patrick did today!The five final  defusing chords were beautifully shaped and the coda entered as a swirl of musical sounds rather than the usual rumbustuous showpiece that seems to be attached as an afterthought by Chopin.It was certainly no afterthought here in the hands of this superb musician as it led so naturally into the gradual passionate build up in Liszt’s F min transcendental study that followed on  almost without a break.A magnificent melodic climax before the demonic build up to the ritornello swept us up in a breathtaking display of romantic pianism.But even in the quieter more lyrical passages there was a sense of colour even within the same hand.Between the thumb and the little finger just as Cherkassky would do as he searched for the elusive secrets hidden within the seemingly  percussive chords and octaves.The animal excitement generated at the ending was indeed breathtaking even over the air! 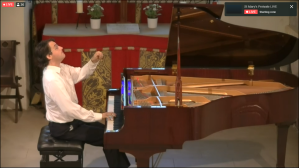 This is where an arpeggio link was necessary to transport us into the magical world of Fauré with his most famous nocture- that in D flat.Perlemuter lived in the same house as Fauré and would try out the nocturnes whilst the ink was still wet on the manuscript.It was the only time he wanted me to tell the public  before he played some of the nocturnes in my series in Rome.He bequeathed to me  his score of the nocturnes with his precious legato fingerings and it is one of my most treasured possessions!Patrick played it exactly as Perlemuter insisted it should be played.Not sentimentally but with great noble sounds also of great delicacy but with a crystalline clarity and sense of legato.How much more  moving it is to hear it played in this almost masculine  authoritative way.The undulating final chords I had never realised until today how unbelievably beautiful they are .

It was the first time that I have heard the Severac  and it was played with great charm and character with washes of colour through his superb use of the sustaining pedal.It was the same world of Debussy and the L’Isle Joyeuse with its fleeting melodic line appearing and disappearing in a maze of fantastic sounds.A wondrous sense of colour that produced jewel after jewel of sounds glistening and gleaming in the wonderful liquid atmosphere that he had created as if by magic.

Annie Fischer springs to mind …no greater compliment is possible!

Happy 75th birtday to Dr Hugh Mather with his wife of 48 years  Dr Felicity who together with his team of volonteers have turned St Mary’s into one of the most exciting show places for amazing young talent to perform and be streamed worldwide.

Posted by Christopher Axworthy on Tuesday, May 21, 2019